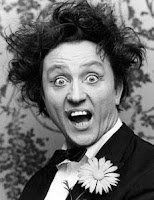 After a refreshingly meaty lunch on the second day, we were addressed by our national director. He reiterated his vision for the organisation. I surprised my colleagues by contributing wholeheartedly to our table discussion. I thought that this would pass the time more quickly. Original Susan nudged me at one point. I paused, wondering if my enthusiasm had reached an embarrassing level. She was, instead, drawing my attention to another eye-catching hat. At the neighbouring table, a man sat with his chin in his hand in a contemplative pose. He wore round tortoiseshell glasses, a donkey jacket and topped off the whole arts liberal caricature with a beret at a jaunty angle. My contribution to the flipchart 'thought shower' ceased at that point.
Posted by Unknown at 4:05 pm