Father of the House 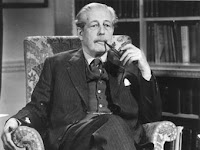 A common feature of Friday afternoons in the office is the arrival of one or two ‘goodbye everyone’ emails. No, these messages are not electronic suicide notes from the more highly-strung members of Arts Council staff. The organisation has an all staff email facility and leavers are apt to share their glee and remind everyone of their existence in a final message peppered with exclamation marks and usually featuring phrases like ‘wonderful experience’ and ‘Ciao everyone!’ Most of the time, the message is the first one I have ever had from the person concerned and reading it feels a little bit like reading a newspaper obituary for someone whose name and achievements had never reached one’s consciousness while they lived.

Today was unusual in that I knew one of the liberated. Monique had been with organisation since its inception and like me had become a knowing old hand at all staff events, smiling at the naïve enthusiasm of all the Johnny-come-latelys who were avidly attentive and asked perky questions on the intricacies of our programme and vision.

It was at such an event last year that a meeting organiser decided to put a new spin on the convention of all attendees announcing who they were and which team they represented. He decided to compound the ignominy of reciting name, rank and number by arranging us in order of time with the organisation. As we consulted and arranged ourselves I realised that I was moving very near the front of the line – when the dust settled I was in second place.

Monique had started a month earlier than me and she stood at the head of the line. The whole manoeuvre happened very quickly. I could see that Monique’s eyes were slightly moist with tears - as though the music had stopped in a game of musical chairs and she had been left chairless and exposed. The whole room looked at her, waiting for her to once again tell everyone who she was and how long she had been lucky enough to work as an ‘Operations Manager’. I felt for her – I could almost empathise. A part of me, however, thanked God that she had been placed in that searchlight of everyone’s attention.

I digested Monique’s email and the significance of this particular departure.

‘God, Monique’s leaving. She’s been there for, like, forever’ observed Original Susan with characteristic tact.

I didn’t respond and then a second email from Monique landed in my Inbox. Monique’s last act as an Operations Manager was not to be her valedictory email to ‘all the wonderful people’ she had worked with. Instead, it was an email specifically to me: