‘I rarely get to ton-up any more dear’, I said yesterday morning when this ritual took place. ‘I have stopped overtaking on bends while sending text messages – all in the past, that kind of thing. I have even started wearing my seatbelt.’

Maude usually adopts her stern 'teacher face' at this point – the one she uses when trying to outstare a spirited teenager at school.

‘You know what I mean. You wouldn’t want to leave me a widow and this poor child (points at bump) an orphan.’

I usually do my mock-chided face at this point and she lightens up, safe in the knowledge that she has put the notion of safe driving at the top of my limited mental agenda. She does, however, have detailed knowledge of my driving habits.

‘What about the flash cards?’

Last year I watched a Bob Dylan documentary and was quite inspired by the film clip for ‘Subterrannean Homesick Blues’. Like most Dylan songs, it is a bit top-heavy with lyrics, but he whips through them briskly and helps his audience with an armful of placards. He drops or flings aside each card when the line is complete. I spent several hours in the garage composing a similar set of message boards – all with a motoring application. Maude flouts the highway code by frequently using her horn 'as a rebuke' (accompanied by some regrettable gestures). My card system is designed, instead, to encourage fellow drivers to reconsider their driving style.

I travel along the A1 a great deal (apart from the occasions on which I am forced to go cross-country. The A1 often grinds to a standstill at peak times and I am forced to pull myself off to avoid an unhealthy build up of frustration). I find that I often end up sat parallel to a motorist who has recently cut me up, changed lane without indication, or has a mobile phone clamped to his or her ear. At such times I have my handy stock of clearly stencilled flash cards. The most useful cards read as follows:

(for handheld mobile phone users) : QUIT YOUR JIBBER JABBER!
(for non-indicators) : GIVE US A CLUE!
(for boy racers) : GROW UP!
(for emergencies) : YOU'LL NEVER TAKE ME ALIVE COPPER!

‘Very rarely used, dear', I reassured Maude, 'and never in anything above second gear.’

Maude put on her coat and kissed me on the cheek, seemingly happy with this renewed attention to safety. She stalled halfway through the front door.

‘I haven’t forgotten about your replica gun.’
Posted by Unknown at 2:25 pm 2 comments: 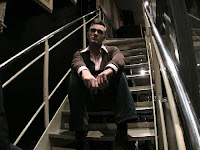 Maude and I attended our first ‘Parentcraft’ class last night. Maude was quite looking forward to it – she had done a great deal of research and wanted to participate fully.

The midwife introduced herself and was impressively warm and welcoming.

I smiled and Carol suggested that all the couples introduced themselves to the group – since we would be sharing the sessions for several weeks.

The introductions began. Couples squeezed each other’s hands, exchanged smiles, gave their names, detailed how pregnant they were and where they lived. Carol thanked each couple in turn and made everyone feel at their ease – especially the men who shuffled in their seats and fidgeted with the change in their pockets. Our turn arrived and Carol glanced over. I drew breath and shifted slightly in my seat. Before I could say anything Maude took over:

‘Hello Everyone! I’m Maude! I am 36 weeks pregnant and I will be having my baby at the Queen Elizabeth.’

There was a finality at the end of this statement, so Carol smiled again and moved to the next couple. I tapped Maude’s arm gently.

‘Well, they don’t really need to know who you are, do they?’

Maude ‘whispered’ this, so it was audible to the entire room. A diminutive father beside me sniggered. I looked closely at him. He was wearing a waistcoat which made him look like a snooker player and his sideburns were shaped to emphasise his individuality. I began to think that I didn’t really want to surrender my anonymity to this group anyway.

Carol took the group through the 3 stages of pregnancy. Maude answered when Carol asked if anyone knew the names of those stages. Maude also chipped in with various technical terms and suggested at one point that one of Carol’s diagrams was, in fact, the wrong way up.

Carol persevered, but began to offer her questions exclusively to the other side of the room. Maude was undaunted and fired her answers at the back of Carol’s head – repeating them until she turned around and was forced to acknowledge that Maude was right.

‘Maude's being doing her research, hasn't she?’ Carol forced a smile.’If I’m feeling under the weather next week, I'm sure she can take yous all through the rest of the course.’

I swiftly fell off my chair to distract Maude, before she worsened the situation by correcting Carol’s grammar.
Posted by Unknown at 12:31 pm 1 comment: