I'm sure that one day I'll look back and laugh...

The nurse proffered her shoulder as support.

‘Hey, it’s handy me being this teeny isn’t it.’

I didn’t answer that and made my way back on to the undersized stretcher/trolley.

‘He just got up on his own,’ explained the nurse and disappeared.

The doctor told me to stay put until I felt truly able to walk and then he left. I stayed put on the undersized stretcher/trolley for another hour or so. I then felt as though I had rallied. There was no sign of anyone coming back to monitor me, so I thought I’d get dressed and head for the taxi rank.
I slowly stood and peeked out into the corridor. I could see the reception desk staff and could hear them chatting about the expense of the extras in the new Mini Cooper. My faculties seemed to be in order. My nurse looked across.

‘Just thought I’d stand up and get ready,’ I said.

‘Right you are.’ She smiled her kindly smile and continued her conversation, which had moved on to woefully inadequate boot size.

When I came to on the corridor floor, what can only be described as a crowd had gathered around me. Many faces peered down at me - some with kindly smiles (staff), others without (passing patients).


So, hospitals continue to host some of the most embarrassing incidents in my life. There's nothing like a bang on the head to aid reminiscence.


When I was nineteen years old a lump appeared at the very base of my spine. It was the result of an ingrowing hair – a common masculine complaint – and had to be excised. A small operation was necessary. I attended my appointment and did exactly as I was told. The young nurse seemed personable - she put me at me ease about the minor nature of the procedure and the swift recovery I could expect. I had read the guidance leaflet and knew that pre-operative shaving was necessary.

‘I will, of course, have to shave your…er…bottom area. So, if you could just get yourself ready on the bed. I’ll get the shaving stuff.’

I was painfully shy as a youth. I was, therefore, troubled in the extreme by the idea of lying naked on a hospital bed behind a thin curtain in a busy ward. I had seen plenty of hospital-based comedy in my time. I knew that mistakes were easily made in such hectic environments. Hospital staff could easily fling back the wrong curtain. I imagined a consultant at the head of a cohort of eager medical students with pencils poised over notebooks. The group would be moving at speed and the consultant would be cavalier in his approach to personal privacy, guessing at the location of an interesting case of elephantitis he had heard about. In his attempt to broaden the experience of his proteges he would inadvertently show them the pale backside of a shy young man from Fallowfield.

My fears were unfounded or, at least, inaccurate. The curtain was pulled back by the correct nurse. She entered and placed the shaving paraphernalia on the bedside table, turning swiftly to restore the curtain and preserve my dignity. I looked back. A large can of shaving foam, a bowl of water, a towel and a disposable razor sat on a small tray. I was slightly perturbed by the low quality razor and the prospect of dabbing shaving wounds with a styptic pencil. I was more perturbed by the nurse’s hesitation:

By this point I was quite relaxed. But then I have always found the nervousness of others quite tranquilising. How, I thought to myself, could this situation become any more embarrassing? Once embarrassment has been achieved to this level, surely it can only plateau and result in the getting on with the task in hand. I looked around at the nurse. The cheap razor trembled in her hand. Her embarrassment had not peaked, it was refusing to plateau and seemed instead to be turning into terror:

She fled. Moments later a burly male nurse appeared and held the razor with a steady hand. As he wordlessly prepared me for surgery, I could hear a group of chattering medical students trooping past. They didn’t trouble my curtain.

Posted by Unknown at 9:35 pm No comments: 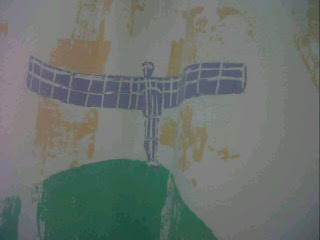 The only option left for paramedics in a small vehicle who can’t right an upturned house husband is to call an ambulance - so an ambulance was called.

‘It’s not an emergency one’, explained Clive. ‘It’ll probably take about an hour. They’ll not keep you in though. My guess is Diazepam and codeine and then back home. You’ll not be dancing, but you’ll be mobile’

Clive was happy with the fact that the ambulance was in no hurry and squeezed in a few more telly questions to Maude, before surprising her with a fan-like hug and kiss as he made his exit. Robert looked vaguely embarrassed and waved awkwardly.

Maude filled one of the children’s backpacks with my pyjama bottoms and a toothbrush, ‘just in case’.

My battered back felt every bump in the road, as I took in the multitude of signs on the interior of the ambulance. Most of them could be boiled down to the simple message: ‘please don’t hit the ambulance staff, they are trying to help you’.

I was, as ever, too long for the stretcher. My feet protruded over the end and it was my feet that opened the plastic trimmed doors of the Accident & Emergency department. The staff nurse’s greeting ‘We’ve got a tall one here’  set the tone for the rest of this healthcare experience.

After the inevitable wait of an hour, a doctor appeared. His eyes were bloodshot, but he seemed thorough and concerned enough. After much probing and examination, he fulfilled Clive’s prediction:

‘Diazepam. It’s a muscle relaxant – it might make you a little bit woozy. And something for the pain. You should then be able to go straight home, but not driving yourself.’

I noticed that he was eyeing my feet as they extended beyond the end of the stretcher. I was wearing rather fetching socks, but later realised that he was making a prescribing decision based on a bloodshot visual assessment of my body size.

‘I think you’re the tallest person I’ve ever met’, observed the nurse, as she squeezed past my feet and into the cubicle.

She set a small paper cup of medication beside me, along with a paper cup with just insufficient water to properly swallow all of the tablets.

I took the medication and waited. An hour or so passed. It felt safe to try and get to my feet. The pain had subsided. It felt good to be able to slowly straighten up. I tried to focus on the Angel of the North – a motif on hospital curtains in the Gateshead area. I couldn’t, I passed out.

I came to on the floor of the cubicle. I understood that I had fainted, but that my collapse had gone unheard. I stretched painfully to reach a cardboard vomit catcher from a trolley and hit the call button.

The dispensing nurse arrived and seemed unmoved. She folded a blanket and put it under my head, which was lolling on my outstretched arm.

‘Just lie there until you feel a bit better, pet.’

I lay there and squinted up. The nurse looked down and smiled a kindly smile, in much the same way that Clive and Robert had smiled kindly smiles.

Posted by Unknown at 6:48 pm No comments: 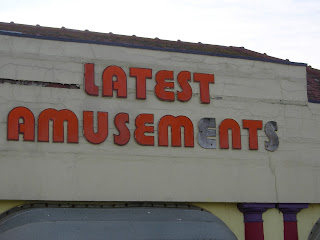 My back was an accident waiting to happen. As I failed to launch from the living room carpet, I had to admit to that the accident had, indeed, happened.

Clive was the senior paramedic or ‘nurse practitioner’, as he clarified. He had recognised Maude on his arrival at the house.

Maude’s recent reality TV debut had caused something of a stir in the area and Clive was clearly an aficionado of the show. He sat and asked me the regulation questions for his forms: age, details of medical history, how I came to be helplessly prone on my own living room floor. He sped through them while his assistant checked my blood pressure and took a blood sample. Clive’s eyes moved frequently from me to Maude. He could hold out no longer:

‘But what about that hairdresser?! How did you not just throw him out of your house?’

Maude happily filled Clive in on some of the backstage secrets of the show and joked about the menu choices of her fellow contestants. Clive reminded her of some of her funniest remarks and commented on how much Maude reminded him of his favourite sister.

I coughed weakly from the floor. It was then that Clive and Robert tried to manoeuvre me from beetle stranded on back to fully functioning stay at home Dad.

‘Well, we could give you a painkilling injection, but that’ll not necessarily get you off the floor. Go on, have another go.’

As I managed to get onto my hands and knees, I could feel a bead of sweat dripping off the end of my nose and extreme pain radiating from a source somewhere around a twenty six year old operation scar. I steeled myself for one last attempt on ‘upright’. As I crumpled back to the floor, I could hear a ringtone of unfamiliar young person’s music coming from Robert’s mobile phone. He apologised as he rifled through his bag. I could also hear Clive.

‘You’ve  got a lovely house, by the way. Looked much bigger on the telly though.’

Posted by Unknown at 3:11 pm No comments:

I could sense Maude’s presence beside me, before I officially woke up. I could feel that she was regarding me closely. Not fair, I thought, to survey ones partner first thing in the morning when they are feigning sleep to avoid getting up with the kids because it can’t possibly be their turn to do so again. I was conscious that I looked weary – the strain of childcare was undoubtedly showing.

I chanced one open eye and, indeed, there she was:

‘You look about a hundred!’ she laughed.

‘Good morning to you’ seemed the only dignified response. ‘I’ll have a rejuvenating shower and hope to pass for a sprightly octogenarian.’

As Maude gets older, she gets better in so many ways.

(Crawford is well into his seventies and most of his news on the telephone relates to death or serious illness. Augusta too, although significantly younger and more active than Crawford, can be similarly morbid.)

Maude’s initial amusement at my cadaverous pallour soon turned, as ever, to talk of tests at the doctors and the inconvenience that would be caused by my early death.

‘It’s good that you’re not driving so far any more, but you really need to look after yourself. Have you been taking those supplements I got for you? They were very expensive…... Do I have any clean pants?’