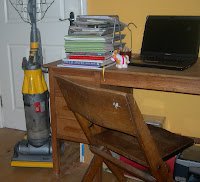 James May
a generic image of a pharmacist in a white coat coming on like a trained doctor
Eric who lives across the road
(that last one is a sketch, as I didn’t want to risk being caught taking his picture).
There is a pile of books just out of view to the right of the laptop which relates to my research on the pit ponies of North East England. I am especially interested in the ponies once used in the undersea mines off Seaham. Aurora saw some of the pictures and donated her own pony to this tableau. The poor blighters of Seaham were taken down as foals and lived an entirely subterranean existence. When the pit closed, they were deemed too fat to come back up and were left down there to die.
I’m sure that my screenplay ‘Revenge of the Zombie Killer Pit Ponies’ will attract serious development funding any day now.
Posted by Unknown at 9:21 pm