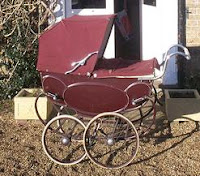 Our neighbourhood has many elderly residents. The area even has one of those ‘Elderly People Crossing’ road signs. I was unnerved by this at first – thinking that I had ended up in a dormitory suburb ‘as it were, for life.’

With old people though, come old customs and manners. This is no bad thing - especially when one of the customs involves the giving of money.

The other day Maude and I took our first promenade with the new baby – Aurora. It was a sunny day so we did a circuit around the leafy, blooming lanes of ‘The Villas’. Maude’s mother, Augusta, walked 30 yards ahead and used her natural authority to divert any traffic or dog walkers from our path.

An elderly lady was busy dead-heading roses in her garden as we passed.

‘Oh, a new baby!’ She exclaimed and leaned precariously over her garden gate to catch a glimpse of the infant.

Maude proudly pushed back the awning on the pram to reveal Aurora’s sleepy face.

‘Oh, she’s absolutely gorgeous,’ continued the old lady. ’So good to see some new blood in The Villas – the next generation, as it were. Wait there.’ She then disappeared into her kitchen. Maude was slightly perturbed. Reappearing moments later, the lady rummaged in her purse.

I realised what was happening and whispered some reassurance.

‘It’s an old custom darling – some older people will give the baby a small amount of money for good luck.’

The old lady reached across under Maude’s watchful eye and pressed a shiny pound coin into Aurora’s tiny hand.

‘Good luck!’ She smiled and returned to her gardening chores. Maude thanked her and we moved on.

I had not seen the giving of money to strangers’ children for many years, but I was heartened to see the warm glow in the old lady’s cheeks as she made the gesture.

I have since resolved to brighten the days of as many of our senior neighbours as possible: early morning walks around the full extent of The Villas (including culs-de-sac) have been highly profitable. Hovering around the trolley return station at Tesco has also paid dividends – the elderly shopper is very likely to be easily distracted after retrieving their pound coin and before you know it another coin has dropped into Aurora’s university fund and the cockles of another old heart have been warmed.

A well-timed saunter past the post office as it opened brought in a remarkable pram haul of £7.59, some Werther's Originals and an Out-Patient appointment card.
Posted by Unknown at 4:23 pm