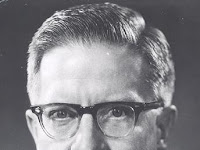 Maude has insisted that the house be reordered, in readiness for the imminent arrival of our first child. Gone is the office – it is now the nursery. Gone is my chest of drawers, it is now the baby clothes store. Gone, even, is the piano.

My piano practice now takes place in the garage. This isn’t quite as bleak as it sounds, as I am surrounded by many of my displaced possessions and it feels quite homely in there. As I was playing the blues in there yesterday, I could hear a voice coming from the driveway. I pushed the button on the electronic garage door control fob which hangs from one of my belt loops. I enjoyed the transient sensation of control. As the door began to rise, a pair of dusty knee-pads came into view and I knew that it was Desmond from next door (he’s a carpet-fitter).

We chatted about his own gradual removal to the garage, as his family expanded. He made a few suggestions about the modifications I could make to create a ‘home from home’..... in a building four feet from my own home.

‘I’ve got a loo in mine…. and a little wash-basin. Me and Celia have walkie-talkies as well, just in case something crops up.’

I could see the radio antenna sticking out of the pocket on his combat trousers. I wasn’t sure that I really wanted to follow the same path as Desmond.

‘That sounded really good, though.’

I played on and Desmond began to ‘drum’ with his hands on the top of the dog kennel (the dog wasn't in there - she has the run of the house).

‘I used to be in a punk band, you know.’ Desmond had a far away look in his eye, as his mind drifted on a wave of nostalgia. ’We were rubbish.’

Desmond laughed and carried on drumming. He kept solid time and the dog kennel produced quite a good sound. I played on and turned the blues into something with a bit more boogie-woogie. Desmond noticed that my toolbox was within reach – its stock of screws and nails visible under the clear perspex cover. He alternated between it and the kennel – the jangling screws creating a passable approximation to the sound of a high-hat.

‘We sometimes get together in Big Alan’s shed down on the allotments, you know. You should come down. He’s got everything in there – amps, drum kit, guitars. He’s talking about rigging up a four-track with solar power.’

I must admit I was enjoying this jamming session with Desmond and felt quite attracted to the idea of a haven in the allotments with a group of kindred spirits. Who would know? We could even record something and send it.........to someone.

As the crescendo of my boogie-woogie rose, a shrill disembodied voice entered the garage and a red flashing light was visible in Desmond’s trousers.

‘Desmond! Do you copy? I can’t reach the All-Bran!’