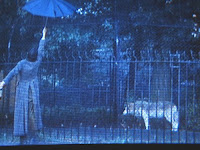 Susan was heartened by this story. She did, however, go on to note that it was a shame I didn’t seem able to mend my career with 'a bit of fusewire’. She didn’t really, she smiled, want to ‘end up’ like me. I thanked her for her well-intentioned observations and reminded her that I had not yet ‘ended up’ anywhere. I was just ‘passing through’ – using the Arts Council for my own ends: funds, company…. biscuits.
Posted by Unknown at 12:20 pm