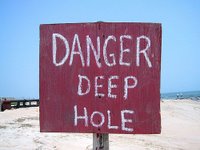 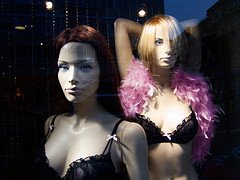 Nothing lights up Maude’s face more than a present, nothing is more like music to her ears than the rustle of wrapping paper.


‘Is that for me?’ she exclaimed, as I handed over the small parcel of lingerie.

There is something reassuring about being clichéd. I stood in the queue at Marks and Spencer behind three other men clutching bra and pants ensembles as Valentine’s Day gifts. M & S had been shrewd enough to post a male floorwalker in the lingerie section for the evening – giving advice and reassurance to men whose only experience of lingerie was taking it off their partners' bodies. I could be jumping to conclusions – they might all have been transvestites (including the assistant). The guy behind me in the line was caressing his chosen gusset with a faraway look in his eye – this could have been lust in advance, or a 'Weekend Wendy' checking on chafing potential.

The man ahead of me had asked for some slow and elaborate gift-wrapping and turned to his brothers in ‘romance’:

‘Sorry chaps!’ He said, with a shrug of camaraderie.

I ignored him. The assistant then asked him if he wanted cashback on his purchase. I half-expected the customer to reply along the lines:

‘I’m hoping for more than cashback from that little purchase!’, complete with nudges and winks to the rest of the queue.

He let me down – he was only half the cliché I took him for……
Posted by Unknown at 8:49 pm No comments: