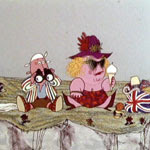 For a full 2 years Archie and Leap had been talking about going to visit Sandy and Lola. Sandy went out to Barcelona to join his Catalan amour a couple of Easters ago.

Sandy began his Spanish career collecting the money after Lola’s troupe of street artists performed on the Ramblas. He then went through an assortment of casual jobs. For a while he was the oldest ball-boy at the Nou Camp, but Barcelona FC let him go when he was beaten to a ball by a disabled fan in a wheelchair (the years of Gauloise smoking had taken their toll on Sandy’s fitness).

Sandy’s relationship with Lola fused her Catalan feistiness and his dry Northern English wit. She enjoyed teaching him all the Spanish and Catalan he needed and they became regulars at many of the town’s livelier bars – Sandy reciprocated by educating her in the detail of British guitar bands from the last 25 years.

Sandy then saw a niche in the market for bookselling and began to hawk dog-eared English paperbacks from a handcart – targeting the university in the winter and the beach in summer. His doting mother, Doris, scoured the charity shops of northern England and sent the books in regular batches. On occasion the poor woman would be unable to source enough secondhand books and would buy new instead. She would then enlist her husband, Arnie, to read them – or at least handle them enough to make them look used.

For her part, Lola was not content to be a street performer for all her life and knew that she needed to move on. Stilt-walking had lost its appeal and instead she took an interview with a global communications company in her stride. Lola also began to realise that her education in the development of British pop music was probably complete.

So it was that Lola decided to spend a large chunk of her savings in a single morning at El Corte Ingles department store. Her hair extensions were removed and a business-like bob was introduced. A pinstripe suit replaced combats and t-shirts. The shoe department indulged her for 30 minutes as she trained herself to finish off the new look and walk smoothly, at ground level, on heels.

Sandy had endured a fruitless morning on the beach approaching baking tourists who he hoped might need a paperback. Responses ranged from ‘No, thank you’ to ‘Raus!’ and he was rapidly losing heart. Sandy had never really adapted his wardrobe to the Mediterranean heat. Lola had applied her talents as a seamstress to one of Arnie’s old suits on a visit to England. Sandy wore the outfit all the time – as a symbol of his love for both Lola and his father. On a warm summer’s day in Barcelona, a polyester suit did not create a feeling of wellbeing in a hungry immigrant trying to run what he described as his own ‘small business’.

Lola had a taxi waiting on the seafront. Her final purchases had been from the bookshop at El Corte Ingles: a title they both knew well and a pen for the inscription.

Sandy’s tarpaulin had been stolen a week earlier. He had used it protect his stock from sun damage and rain, but a homeless drinker had used it to create some shelter in a nearby park and Sandy did not have the heart to reclaim it. He removed his jacket and placed it as a makeshift cover on a collection of spines boasting many holiday reading favourites: The Naked Lunch, On The Road, Hangover Square and American Psycho. Sandy found a lamppost against which to lean in a Belmondo attitude. He tapped a cigarette out of his pack, lifted it to his lips and lit it in his timeworn fashion. As he exhaled the first acrid cloud of his smoking session, a businesswoman dashed from a waiting taxi and pushed a book-shaped package into his hand. As the smoke cleared he watched the taxi disappear into the chaos of the midday traffic. He opened the El Corte Ingles bag to expose the first new book he had seen in some time - a crisp new English edition of Kerouac’s On the Road. The inscription was pithy:

Sandy realised that while he had been preoccupied in assuming his favourite film pose he had let real life jump in a taxi and leave him. He took a long, consolatory drag on his Gauloise. His smoke seemed to be merging into the smoke of others nearby. A sea breeze arrived to clear the conglomeration of fumes and stood before him were the small, smiling, haversacked figures of Archie and Leap.

Sandy was still in state of devastation and found it hard to feign enthusiasm for the sudden arrival of his old friends.

‘It’s me, Sand!’ Archie jumped a little to emphasise his presence.

As Archie began to quietly sob, Sandy was roused from his miserable reverie. New fumes were reaching him and he realised that his jacket had spontaneously combusted in the sun. The entire stock of his ‘small business’ was now aflame – the handcart a funeral pyre for the books he loved and for his Barcelona affair.
Posted by Unknown at 5:30 pm