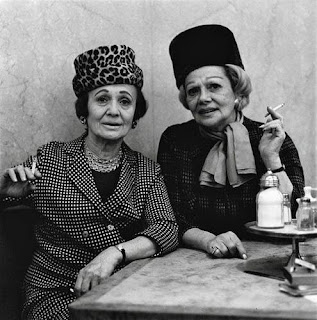 I met Sadie for coffee and pancakes today. It was at a cafe at the end of my old street.

'Maude and I had our first flat just round the corner you know. Before the kids and all that. This was a real ale off licence then.'

I looked around. Art Nouveau styling, people reading books. It all looked quite metropolitan...for Newcastle.

We talked about children. Her two, my two. I knew that she wanted to discuss difficulties at work.

She knew that I was perhaps the only person who knew the true nature of her present/my former manager. There was a pregnant pause. I broke the silence.

'We can only talk about her if we agree not to mention her name - a bit like actors and 'The Scottish Play'. I don't allow it to be spoken in my house and I'll not have it polluting my rare social engagements.'

Sadie nodded. 'But how should I refer to her?'

'Well some of Maude's less able kids have great imagination when it comes to assigning epithets to their classmates and teachers. They have a maths teacher, for instance, who talks out of one side of his mouth. They christened him 'Luke Sidetalker'. I suggested an exam pass at least for whoever thought of that. One boy calls a sandy haired classmate 'Ginger Teeth'. I particularly like that one.'

'I like 'Ginger Teeth'', said Sadie.'It's quite apt and stops me demeaning myself by swearing in a public place. 'Ginger Teeth' it is.'

Sadie detailed some of Ginger Teeth's recent antics: shady dealings with funders, applying for a job that Sadie had expressed an interest in, not telling Sadie, getting said job and adding it to her portfolio of roles, the promise of a new contract for 6 months, non-manifestation of said contract in paper form etc...

I was unsurprised by any of what I was told. Sadie explained that she put up with the maltreatment for economic reasons. She seemed to be asking me if she should launch herself into another 6 months of self-esteem battering.

'You really shouldn't take on the new contract - even if it does find its way on to paper.'

'But how will I pay the bills?'

I thought for a moment.

'In short you need a way of raising money which is less demeaning?'

'Given the choice, myself,  I'd rather play the spoons at the Monument.'