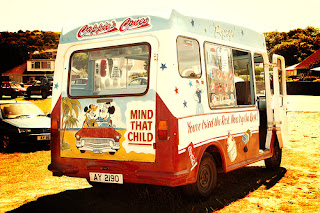 Aurora wrote carefully on another strip of paper for the jar.

It was at this point that Maude appeared with untypical stealth.

‘It’s a new idea, darling. We’re writing activities and destinations on small pieces of paper and putting them into a jar – to be shaken each morning. The girls will take turns selecting a note.’

‘And you are helping your daughter spell out glamorous destinations like ‘the garden’ and ‘the park’. Why so wildly adventurous – why not ‘your bedroom’ or ‘the cupboard?’

Maude began to extract notes from the jar and scrunch them up.

‘It’s a little bit like your austerity ice cream. Buying cones and ice cream from LIDL and setting off a music box and pretending that a corner of the kitchen is an ice cream van. That was endearing for a while....’

Maude had continued to edit the contents of the jar as she spoke and I could see that it was now almost empty.

Aurora has a flamboyant hand and struggled to fit two words on her notelet. She wrote ‘ART GALL’ on one side and flipped it over to add ‘ERY’.’

Maude was reaching the last few notes in the jar.

‘Since when, by the way, has ‘Joan’s Park Shop’ been an exciting and edifying summer holiday destination for your daughters?’

‘They love the crazy golf. Joan keeps the clubs in her shop – that’s the only reason it’s in there.’

‘What about Pet’s Corner at Jesmond  - or even a trip to the zoo. Aurora: Z.O.O. You know how much they love unusual animals ’

‘Joan does have a parrot.’

Email ThisBlogThis!Share to TwitterShare to FacebookShare to Pinterest
Labels: childcare