'John from down the road' 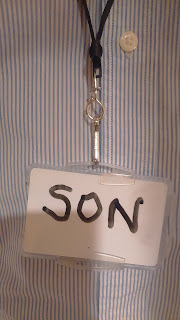 My father suffered from Lewy Bodies Dementia - which meant that, in his case, he hallucinated. His visions often involved animals and some of the things he said suggested he thought he was working with sheep. This was fitting for someone who grew up on a farm. He reacted well, apparently, to the ‘therapy donkey’ they took into the nursing home.
The beastly hallucinations moved Dad on from his imaginary pub - in which he described the nurses around him as ‘barmaids’.
When I visited him for the last time he moved his hands at one point as though he were daintily tying a knot around a tiny neck - possibly of a small animal which had found its way over the high side-guards to share the comfort of his bed.
When he had finished doing whatever it was he thought he was doing, my mother and I took turns at holding his hand to soothe him. He was agitated and called out for each member of his family - repeating each name over and over again until something told him that person wasn't coming and he shouted then for the next one.

He didn't shout much for his immediate family towards the end - not for his wife or children. Rather he shouted for his mother and his siblings. This made me think that only his long-term memory was still firing.

At work I am a temp with no memorable identity. It felt a little like that with Dad at the end. Who knows who ‘John from down the road’ was, but it probably wasn’t me.
The final gentle nurse in a long series of gentle nurses adjusted the bedding. She asked us about the family while Dad slept one of his last sleeps. She had just come on shift and hadn’t known him awake. He roused just before we left and became animated. He was talking about something or someone being ‘behind a wall’. My sister answered and played along with the events in his mind. After he spoke the nurse was surprised and remarked:
‘Oh! He’s very Irish isn’t he?’
‘Yes,’ we said, ‘he is’.