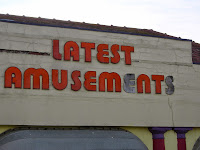 ‘How old do you think I am?’
This struck me as an interesting departure from the usual:
‘Going anywhere nice on your holidays?’
To which I inevitably answer:
‘No…...I’m going to Northern Ireland (sad face)’
I looked at my new barber in the mirror.
The salon owner is my usual barber. The salon has a big TV permanently tuned to MTV. There is also an alcove in which a very large bird cage houses half a dozen canaries. The canaries seem to sing along to the music on the TV. When there is a gap between music videos the birds seize the chance to entertain the customers on their own.
The owner is Omar and he is not much over five feet tall. He calls me over to a chair and avoids standing anywhere near me. Omar is in the habit of giving me manly tips: a very convincing hair transplant in Poland for only £200 or a happy finish at the massage parlour over the road (fee negotiable).
‘I’m single – always horny innit,’ he said in his defence.
Omar was chuckling as I pondered how old his apprentice was. I suspected that this was a routine designed to break up the barbers’ day and that it was very probably a trick question.
‘I’m not a good guesser of ages,’ I said, ‘I tend to cause offence.’
He was smiling and told me to go ahead – he wouldn’t be offended. He was stocky, hirsute and what can only be described as very ‘Turkish’ in appearance.
He looked at least 30, so I thought it best to shave a few years off (excuse the pun).
‘I’d say about 26…’
Omar laughed wholeheartedly. This joke clearly never got tired. The junior barber laughed also.
‘I’m sixteen,’ he said. ‘I know I look much older. I’m a boxer you see. I box when I finish in here.’
He paused and assumed a south-paw stance.
‘To get anything in life, you have to fight and work (left jab) hard! (right upper-cut).’
I could see that he was looking me in the eye (in the mirror) – waiting for some kind of reaction. I felt slightly uncomfortable being given life advice by a 16 year old - even if he did look much older. I could see that he was sincere, though, and he certainly had a point.
I just smiled my best smile of admiration for his youthful bravado. He then guessed at my age and prudently went for 44.
‘I’ll take that’, I said and then told him I was 53.
‘I’ll make you look 48,’ he exclaimed and the very brief glow I had been feeling quickly subsided.
Posted by John McGagh at 11:36 pm